After running a 50k, a 100K, a 50 miler, and a half marathon in 27 days, a few people had told me it was a good idea to rest a bit. But knowing that the new and improved “hometown” Harrisburg marathon was on the horizon, I felt I could squeeze it in before the dark depths of winter settled in.

This year’s Harrisburg marathon featured a new course in and around the city. Instead of taking the runners through the scenic, but hilly Wildwood Nature Center hills and the infamous Industrial Road, they had the runners run on the “west shore” and north to Fort Hunter.

The weather was to be perfect with sunny skies and cool temperatures. My wife Caryn was also running the relay event. She would be running the first leg, which equaled just over 8 miles. This also meant that we would start out running together!

We started on the Market St. bridge and headed west. Both Caryn and I fell into a comfortable pace. Caryn had her normal headphones in, but when I did mention something, she was able to hear me. Thanks for keeping the music low, hun 🙂 . As we ran up along the west shore in the first mile, I took time to appreciate my surroundings. Here we were in the capital city of our state, on a gorgeous morning, running 26.2 miles just because we love it. Better yet, my wife was by my side… 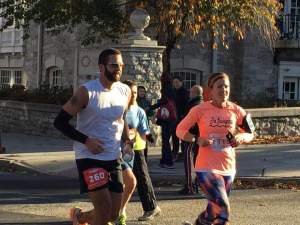 We crossed back over the Harvey Taylor bridge and headed south. Aid stations were separated every 2 or so miles, so we would get a cup of Gatorade or water. By about mile 5 or so, both Caryn and I had shared that each one of us did not want to hold the other up and to go ahead. A little past mile 6, she had said the sun was getting warmer and she wished she would have dressed with less gear. I gradually went a head of her. The next time I would see her would be about 20 yards from the finish, screaming her lungs out as normal. She is my best supporter and my #1!

As we left the PennDot area, I realized the next 10 miles or so I would be heading north, mostly along the Susquehanna River. The great part of running a hometown race is that you see a lot of your running friends either in the race, or cheering along the course. The support was great. I felt comfortable the entire time and the fan support had a lot to do with it.

At the halfway mark at mile 13, I was shocked on how fast this race was going. I don’t mean how fast I was running it physically. I mean how fast mentally. I have been used to going 6+ hours at each event this past summer. This picture was around mile 14, I believe…

Approaching the turn around at Fort Hunter around mile 17, runners ahead of me were passing me heading the other way. It was another opportunity to see fellow runner friends and cheer them on and give them support as they went by.

I was pleased with the way my legs held up, but by around mile 21 or so, they were getting a bit heavy. This is a normal feeling. I had no sharp pains or anything of the sort.

The last few miles I stopped to walk a few times. It’s not what I wanted to do. My brain said go, but my legs said no. At any rate, the finish was in downtown Harrisburg. The race director and volunteers had the finish line set up to be a “party” atmosphere. As I turned the corner for the last tenth of a mile, I heard my wife’s voice cheering me on. I glanced off to my left and sure enough, there she was. Here I am crossing the finish line…. 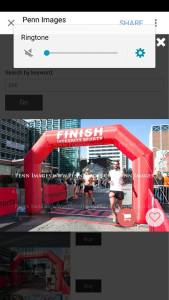 I was pleased with the way I ran. After completing it, I did a little math and figured out that I ran a negative split. I ran the second half of the marathon faster than the first half. I love that feeling!

Caryn’s relay came in 5th place in the mixed division. We celebrated in town with good friends, good beer, and good food. Another great day of exercise in the books!

After the Oil Creek 100K, I was looking forward to a little break from ultras. That was until my wife Caryn came home and told me she had a talk with one of my trail running friends. Donald had told her he was running in the Tussey mOUTaiNBACK 50 mile race the up coming weekend.

The Tussey mOUTaiNBACK 50 Miler was the first ultra I had ever heard of. In 2010, I was in the middle of running a lot of marathons and was interested in going further than the 26.2 miles they called for. When I searched ultras on the computer, Tussey was the first ultra that came up in my area. I read up on it, but in the end I chickened out. It was 50 miles and had multiple mountain climbs.

Fast forward to 2015 and I did not hesitate to sign up. At first I thought I was too late in signing up. Their website said sign up closed on Oct. 10th and it was Oct. 20th. The race was 5 days later, Oct. 25th. I went through the motions on their website anyways and sure enough, it allowed me to sign up!

The entire 50 miles is on gravel roads(about 75%) and regular roads(about 25%). I knew this was going to be tough for me. My legs were still recouping from Oil Creek and Tussey called for a lot of running.

That morning I met up with Donald and his friend Alicia, who would finish her first 50 miler that day. It was Donald’s 9th Tussey 50 miler. Just another walk in the park for him. Here’s Alicia and I right before the start…. 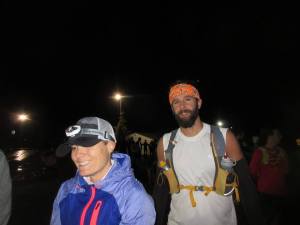 I also saw Danny, who ran the Oil Creek 100 miler, and was at Tussey cheering on his friend Kate.

The weather was to be nice. Cool and a chance of rain in the morning, clearing and sun in the afternoon. It down poured 10 minutes before the start and did not rain again. It stopped right before the official “go”. Here is the start at 7:00am….

The first 4 miles were a gradual incline. I settled into a slow jog heading up. I knew the more energy I wasted early, the less energy I would have late. Those first 4 miles, I think I stopped to hike once. I got to the first aid station(AS) at the top and did not stop. We quickly started the decline back down the mountain. I got into a nice running grove and before I knew it, I was at AS2. I stopped to munch on a couple pretzels and exchanged pleasantries with the volunteers.

The next 12 miles or so were rolling and very easy to run if your legs were fresh. I can normally tell how my day is going to go, in any type of race, during the first 10 miles or so. For me, Tussey was going to be a fight to the finish that day. Here’s the elevation profile…

The Tussey event is not only an individual 50 mile challenge, but also includes a relay. I’m not sure what the rules were, but I believe you could choose how many runners would be in your relay, ranging from 2 to 6. Again, not sure if that’s right or not. What I am sure of is that throughout the entire race, relay runners would wiz by me at top-notch speed. But not only runners, but also cars that were following along. No, Tussey is not like any other trail run I found out. There was no more than 10 minutes of “alone time” until a group of cars or runners would dart by me. They would give friendly comments as they went by. It turns out, the individual 50 mile runners were called “ultra”. “Good job ultra” and “looking strong ultra” and “way to go ultra” were the common gestures throughout the day. That was so much appreciated.

At mile 20, the famous “stairway to the stars” climb started. It was a 1,300 ft. climb in 3 miles, with a steep hill to start it off. It was described before the start as never-ending. You would make one turn thinking you were at the top, then you would climb again…. 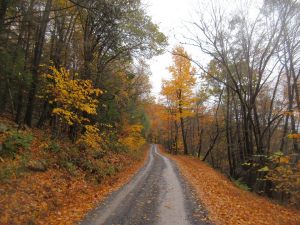 It did seem like it would never end. At one point near the top, I remember the sky getting much darker and the air getting much cooler. I am used to shorter, switch back type climbs on sign track, not the never-ending type.

I finally got to the top and AS6 around mile 25. There were 11 AS’s throughout the race, which was plenty. I also met up with Danny. His plan was to get some miles in the Rothrock State Park and also follow his friend Kate while doing so. He caught up with me for a few miles. We talked about the normal stuff ultra runners talk about: trail running apparel, other races, and beer.

After descending the mountain and around mile 30, I assessed the way I felt. It wasn’t that good. My legs were tired and my energy was blah. I thought of the reasons why I was out there in the first place…for the enjoyment, for the challenge, for the exercise, for the camaraderie with other runners. I was experiencing all of them at the same time. I continued on. Throughout the day, I would see branch off single track trails that I would have gladly taken to mix things up a bit. The area was new to me, and the sights were great, especially during peak fall foliage season. I remember looking off to my right climbing up a hill and seeing nothing but a sea of yellow.

Danny met up with me for another mile or two, which helped me along. After another gradual incline, this one about 800 feet in 3 miles, and another descent, I approached AS10 roughly 40 miles in. This stretch was also along a paved road….

Earlier I commented that my experience that day could end up being a fight to the finish. I did not disappoint. The fight was definitely with my legs. The ultras I had done in the past month or so were finally catching up with me. Heavy, sore, achy, twitchy. You name it, my legs felt it. But hey, this was a 50 mile race. And I signed up for it. I accepted the fight with the legs as just another challenge and it was just what I wanted.

I got to the top of the last climb at mile 45 and felt relieved. Maybe it was because I knew I was going to complete it. Normally I would relish in a downhill finish, but I knew these last 5 miles were going to be painful. I thought of all that I had accomplished in the past few months and I was proud of myself. I ended up running/hiking the descent. Once at the bottom, I was able to run the last mile and a half to complete the race, about an hour slower than what I wanted.

As the wise man said, a great time is not always measured with a watch. I agree with that man. I’ve learned that over 10 + years of running and that’s one thing I’m most proud of knowing. I’m competitive. But sheer enjoyment reigns supreme over anything else. If I would measure my running happiness simply on how fast I ran an event, I would’ve given up on running long ago and would have taken up Nascar driving or something of the sort.