I had been planning on running the New Jersey portion of the Appalachian Trail for a few months now and this past weekend, I was finally able to get out there and do it. Both of my parents and my wife came along to help crew me and make sure I didn’t make a wrong turn or didn’t get eaten by a bear. I knew bears were plentiful in New Jersey.

Saturday morning we found our starting spot not far from the New York/New Jersey border, stepped out of the Jeep, and were greeted with this bear….

He circled around then headed in the direction of the southbound A.T.(the trail actually heads west for about 20 miles). Great, the same direction as I was headed! I started running after saying my goodbyes, crested a hill, and went down the other side. I started clapping my hands and yelling to try to scare the bear away. I heard the bear rumbling along and saw his footprints in the mud. Luckily, he disappeared, but in the mean time, I veered off the trail. I had to backtrack to get back on the A.T. This wasn’t the way I wanted the weekend to start.

Eventually, I got into a groove. The first 7 or so miles were a mix of wooded trail and wet, swamp like land. After meeting my family crew, I continued on. The trail opened up into a field. They had planks down due to the wetlands. These planks were scattered throughout the northern section of the NJ A.T.

After some more miles of woods and fields, I came to another wetland area. It reminded me of a local area where I live called Wildwood Lake…

After about another 8 miles, I met with the crew again. They had watermelon, black bean burritos, bananas, chips, pretzels, pickles, Coke, and Gatorade for me. On average, I would meet them every 9 miles. Here they are… 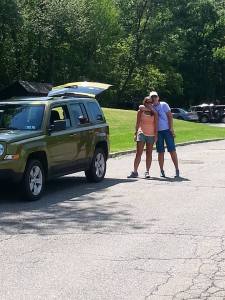 I had about 10 miles between the last crew stop and High Point, with a gradual elevation gain of about 1,200 feet. The first 4-5 miles of that section included woods and fields. It was really getting warm by then so I slowed down.

The terrain wasn’t bad. I then reached the mountain and climbed some more, eventually getting to High Point. Here I am with the monument in the background… 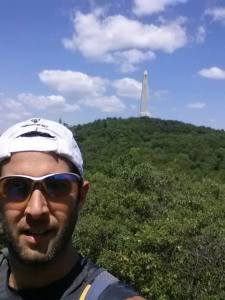 It was also around High Point where the trail turns and heads south. It also meant it was time to run the same ridge line as the eastern PA A.T. And that meant ROCKS! The last 10 miles or so of the 33 mile day included shark fins(my term for rocks that are shaped like fins that stick out of the ground just enough to cause havoc for hikers and runners) and rock climbing. There may have been a field and swamp area in there as well, but was primarily steady rocks on the trail. 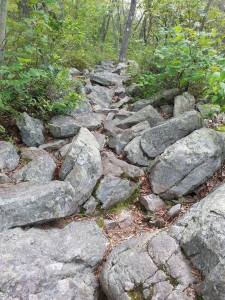 I finished the first day already worrying about the next day. It was to be 37 more miles. The temperature was to be even warmer, with it in the high 80’s and a feel like temperature of 95. The terrain was to be rocky, but I wasn’t sure how rocky.

I woke the next morning with those same thoughts. I would stick to the game plan of putting one foot in front of the other and see where it would lead me. The crew and me were able to get an earlier start than the day before. Who knew how long this day was going to take. I took my headlamp along just in case the day would turn to night.

The first few miles had shark fins scattered throughout. It can get frustrating when you are unable to get into a rhythm. I would run a few tenths of a mile, then would have to slam on the breaks or carefully navigate the fins/rocks. Early on I saw what I thought was a hound dog sprinting across the woods, but then realized it was a baby white fawn, with a brown head. Here is the picture, with the fawn’s mother in front followed by the white fawn behind….

I could tell it was already warmer than the morning before, but I also knew that I would be in the mountains more, which meant more shade.

Like I said earlier, I was heading southbound. A lot of through-hikers were making their way northbound. The atmosphere on the Appalachian Trail has always intrigued me. You could be out in the most remote place there is, but still have a feeling of connection or an attachment with the hikers. Exchanging hellos was part of the experience this weekend with them. Around 10 miles in or so, I was feeling kind of down and was tired and felt that maybe I wouldn’t be able to complete the 37 miles for the day. However, as I passed a lady hiker and her dog, she pleasantly said hello, then simply said “enjoy”. That hit a cord in me. I asked myself the following: Why am I doing this? What am I doing it for? How am I going to do it? Each question was easy to answer. It all came back to enjoyment. Shear enjoyment. I started to relax. I had the entire day to complete those last miles. There was no hurry. Within an hour, my negative thoughts were gone completely and I enjoyed the last 20 plus miles.

There were multiple ponds throughout the NJ A.T. This one showed up after my enjoyment came back. Think tranquillity, the sound of crickets, the smell of ferns and this little pond…nothing better.

I also realized that since I was in the shade a lot more this second day, it was not going to be as hot as what I thought. Every once in a while on top of the mountain, the trail would open up and there would be an awesome view. There was also a bit of a breeze that helped as well. Two women were having a picnic at the top of the ridge and one was nice enough to take this picture of me…. 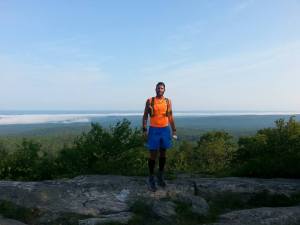 The trail didn’t get any easier. There were some rolling hills and lots of rocks. I met the crew around mile 25 and they were informed that the next few miles were going to be a lot easier running. It was…flat with no rocks. After a few more miles, I met up with the crew one last time before tackling the last 10 miles.

The last 10 miles were a mix of nice rolling trail and another vista or two. I also came across Sunfish Pond. It is a very big pond. It actually looks like a big lake. I had been told it was especially rocky in that section. The trail went right along the edge of the pond. Picture big rocks and boulders with thick brush, with hardly a trail visible to the eye. That’s pretty much how that stretch of trail was. The pond was beautiful, much like a lot of the NJ A.T. trail, but there was no way any normal trail would go through there. But it’s the A.T., and it’s not any normal trail!

That last 4 miles were an absolute luxury for me. I was pleasantly surprised that the trail going down into the Delaware Water Gap was not rocky at all, nor was it a steep decline. It was all gradually downhill. I was on cloud 9. It felt so good to run the last 4 miles and not have to stop at all to hike. There was a stream going down the gap with nice waterfalls. As I approached the bottom of the gap, then past the first parking lot and went under Interstate 80, I couldn’t help but feel proud and lucky to have run the New Jersey portion of the A.T. in two days. I had finished this day with multiple hours of daylight still left. I was also grateful that my parents and wife were willing to help me out with this challenge. Here I am at the end with my parents and wife… 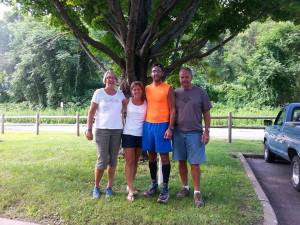